Nick James of Franchise Central says ‘Ni Hao!’ as he enjoys the taste of home at The Coffee Club in China! 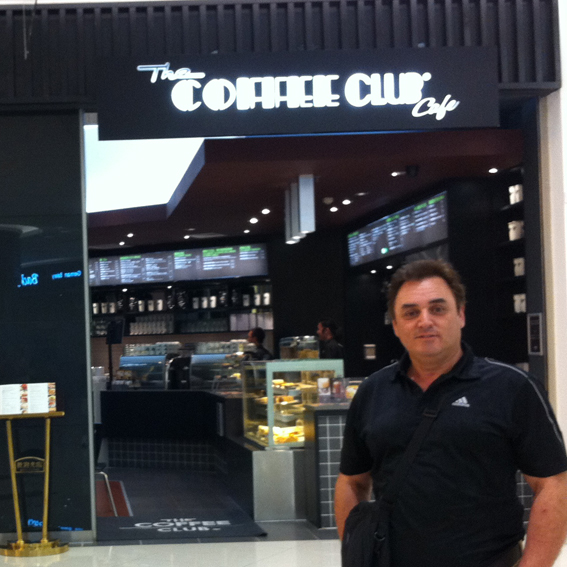 Just before Franchise Central took its position at the 23rd China Guangzhou International Franchise Expo to promote franchise and master franchise opportunities for both the Asian and Australian markets, Franchise Consultant Nick James took time out to enjoy the taste of home at The Coffee Club.

“Those that know me know that when asked, ´Where will I meet you?´, I make no hesitation – The Coffee Club! No matter where I travel, I make it a point to enjoy the country´s culture and cuisine. China is no different in that I had been enjoying some of China’s most exotic culinary delights for days and was thrilled to be able to sit down and enjoy the taste of home right there at The Coffee Club in the bustling Yuexiu District in Guangzhou,” says Nick James.

John Lazarou, Director of The Coffee Club, said that it was the perfect time for the business to enter China, with a strong coffee culture growing in the country despite most Chinese traditionally drinking tea.

“With over 1.3 billion people, a growing middle class and general elevation of living standards, many tea drinkers are starting to switch to coffee to feel more cultured,” Mr Lazarou said.

“Coffee drinking is seen by Chinese as a sign of western sophistication and therefore a luxurious commodity- with aspirant young professionals seeking it as part of a modern lifestyle.

“Reports indicated back in2006 that Chinese coffee drinkers consumed over 45,000 tonnes of coffee beans, with some analysts expecting it to increase by 15 per cent a year,” hesaid.*

The first cafe is located in a vibrant economic corridor, seen as a major transport hub with nearby Hong Kong. The Coffee Club has sold a major franchise licence to the Guangzhou Golden Swan Enterprise Group CO., LTD, which plan to open a further 30 cafes over the next3 years.